Grossness.  Apparently there wasn't enough exploitation in the world, so some Disney man and his friends came up with a way to own the tooth fairy.  They made them as fake and Disnified as possible (in vomitous purple and pink mostly) and called them the "real" tooth fairies.  Everyone knows the tooth fairy is our parents.  Maybe a few kids believe it's really a fairy, but if they get all involved in the realtoothfairies.com world then they're either going to be really upset when they find out that their parents conspired with the tooth fairy pimps OR they're going to go insane.  Either way,  I hope those girls do some damage when they find out.   Yeah, it's disappointing when you find out that the Easter Bunny and Santa aren't real, but those two aren't trying to get you to create an online relationship with them, that could end up with you meeting some creepy man at his hotel.  Who are these "Real" tooth fairies?   Strange adults who are having children write to them and who are writing back!!!??  EEewwww.   Where's Chris Hansen and to Catch a Predator?

Okay, so here's a link [that doesn't work because I just had to take the link down because they do not want you to see it -- I will work on finding another way.  it's awesome in it's awfulness] to the video where you can see the investor's pitch.  See if you can get through it without horking.    They could've at least gotten union actors.  I almost didn't believe it was real, but they already have a working website.

And here's a picture from the website.  Look on the left side under the "For Parent's section.  The second option is UPGRADE Your Girl.   WHAT????????  Upgrade me?   That is not an option.  When you have a kid, that's it.  You don't get to upgrade like a new iphone.  If we're not good enough, it's probably your fault anyway.  And you wouldn't need an upgrade if you weren't trying to sell us bullshit like this.     Just put the money under the pillow and we're all happy.    And since I'm not supposed to know it was you, don't expect a thank you note.

And girls, just say no.  If it feels creepy, it probably is. 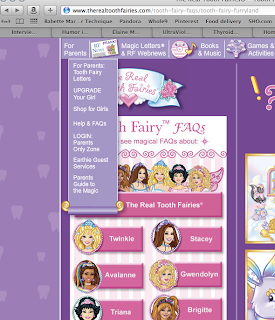