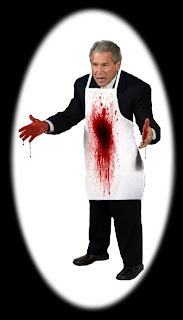 "President" Bush doesn't care about children either (even the white ones). He plans to veto the bill that would give health care to more children. But ALL senior citizens have govt. covered health care. How does Bush think they're gonna pay for the senior citizens (aka voters) if the children are too sick to work? But I guess then just the fittest will survive and then we'll get healthy slaves from other countries (aka illegal immigrants or sometimes actual real slaves) to make up the difference.

Why is he still in charge? And why are we supposed to respect our elders again?

Posted by Ethel Spiliotes at 11:06 AM 1 comments 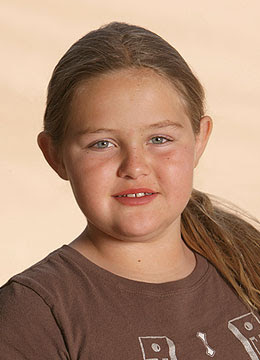 "40 Kids, no Adults" -- yeah except for the ones with the cameras. And I'm pretty sure it wasn't a kid who wrote the contract the kids parents signed that gave away their rights to sue the network and the show's producers if their child died, was severely injured, or contracted a sexually transmitted disease during the program's taping. They also gave CBS the right to "search the minor's person and the Minor's belongings (including, without limitation, by x-ray or similar device)." Additionally, the agreement notes, "Kid Nation" participants "will have no privacy," except when they are in the bathroom. Provided, of course, that the child is actually "in the process of showering, bathing, urinating, or defecating." (how would they know that?)

Yes. I'm sure this is how children would set things up if they were really running things.

As for the show, I would put Emilie in charge, and I'm worried about Greg, who already had a lot of experience butchering (why?!?!) and then killed the chickens "for the other kids" who wanted "fresh meat" and then they didn't give him the gold star. By the way, both of them are from Nevada, so it's not a geographical thing.

I feel gross watching it and promise not to buy any of the products that advertise, but I don't think that'll be too hard. I don't know who the target audience is, but they had an ad for Vagisil. I know it's dry in the desert, but...

the Scared and the Profane

A man wrote a comment today about my "Support our Sister" blog entry saying that if I'm in 5th grade then I "need to learn to write/speak without using profanity." Who the fuck is he to tell me that? Oh, it's okay to swear if you're an adult but not if you're ten? Is that another one of those privileges you only get if you're big? He also said in his comment "before you ask, yes I have taken a human life." Uh, I wasn't going to ask because it never occurred to me. Still, I'm glad that whoever JR is he (or she maybe?) wrote to me and is reading my blog.

I was glad to hear today that Warren Jeffs was found of guilty of forcing a 14 year old girl to marry an adult and get raped by him. It's lucky that it wasn't an LA jury. 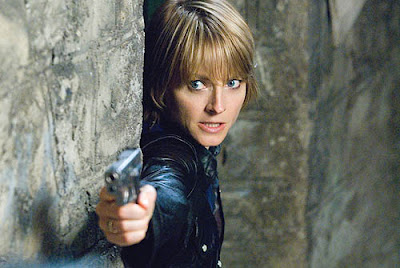 Just because OJ Simpson beat his ex-wife and "if he did it" slaughtered her and her friend, doesn't mean he is also guilty of armed robbery. I mean just cause someone would maim and kill doesn't make him a thief. And there are lots of thieves who would never hurt anyone, and I'm sure they don't consider him one of them. So we shouldn't assume that he did it.

The trial of Phil Spector is over, and the jury is debilitating. OJ and Robert Blake went free, and if Phil Spector goes free then it's time to take to the streets. Prepare. Only a full scale rebellion will make it clear we will no longer tolerate the murder of our sisters. It will be hard for us to burn down our own neighborhoods, because we don't really have any - we've been dispersed and separated, but there are more of us than there are of them and if we stop accepting the way things are, then they're not the way things are anymore, you know what I mean? I can't say here what specifically I have in mind, but I know you have earned your creativity badges and are ready.

This is probably just an exercise in emergency preparedness, because Phil Spector is way too ugly to get away with it, but you never know. Grosser people have gotten away with murder and other things...

Posted by Ethel Spiliotes at 11:09 AM 1 comments

Quit eating the dolls you idiots


Today Mattel announced a third toy recall, mostly involving Barbie toys. I know babies like to put everything in their mouths, but what babies are playing with Barbies? Of course it's probably their older brothers and sisters who are trying to kill them with the lead pieces, but trust me, if they want to kill them or make them eat gross things, they don't need lead painted toys to do it.