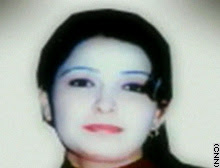 A 17 year old girl was beaten and stoned to death by her family and other people in Iraq - to protect the honor of her family? I'm so glad we "liberated" the Iraqis so that they can create honor by murdering girls and women. It's 2007. What is wrong with these people? (If America really wants to help they should offer to adopt all the women (and children) in the Middle East who want to come here.) They say they had to kill her because her falling in love with a man who wasn't the 100-year-old uncle she was probably promised to brought shame on them. Oh, I see, but you don't feel shame for KILLING HER?

I'm drawing up my "honor roll" right now, and you better believe I'm going to be getting rid of a lot of shame.

Posted by Ethel Spiliotes at 9:24 AM 2 comments

People give us baby dolls when we're little girls, but me and my friends prefer stuffed animals. Baby dolls are for older kids to learn in parenting class how hard it is to take care of a baby and maybe not have them when they're in high school. I found this on ebay: 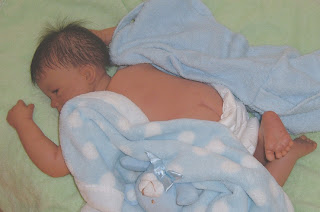 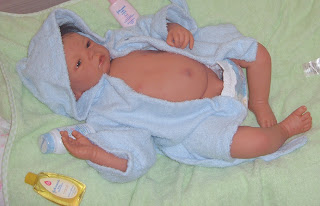 Yes! They are selling baby fuck dolls now. And don't say I'm sick because it's just a baby doll for a lonely person or a really rich kid (it's over $500!), because any thing that says "This is a private listing. Your identity will not be disclosed to anyone but the seller," is not some innocent toy. How is this even legal? Why do you want to buy a fake baby that's "anatomically correct?"

I hope it's a trap and the seller is some kind of sting operation, and the buyers end up in prison being treated like that baby doll. 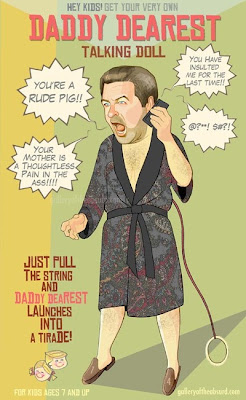 this is from Gallery of the Absurd:

Another poor alcoholic (NOT)

Here's a headline I just read:

HBO Chief Takes Leave of Absence to Sort Out Sobriety.

Apparently him beating his girlfriend (and a few other ones before that HBO had to pay off) was just some sort of weird side effect of alcohol. That's what they should teach us in our anti-drug classes: that the evils of alcohol include: anti-semitism, having sex with children, calling people niggers, and beating up and/or choking your girlfriend, and then they should have Mel Gibson, Mark Foley, Michael Richards, and Chris Albrecht come to our schools and tell us that we shouldn't drink or we'll be just like them. It's amazing what alcohol can do. It must be a very powerful drug to make these otherwise nice men do these terrible things.

I think Betty Ford should tell everybody that these men are full of crap and might be alcoholics, but are also criminals and jerks and are giving alcoholics a bad name and they should stop it. Alcoholism might be a disease, but that's not what these men have - they have the disease of being allowed to do whatever they want because they're rich and powerful and white and male, and then they each got caught on tape (or email, or police report, or whatever). I guess that's one good thing about all the videophones and cameras and internets is that you can't keep secrets as much as you used to. Na na na na na.

PS. Me and Frances drank a whole bottle of concord grape wine and we didn't do any of those things. We just laughed a lot and danced and threw up.

Someone wrote a comment saying that not all fathers are like Alec, and I believe that is true (but the ones in the "father's rights" movement pretty much are. And that's totally beside the point, because there shouldn't be ANY abusive fathers, and there are a lot and they're allowed - it says so in the bible.) And then the commenter, like so many other people, and especially Alec said that Kim is at fault too because she released the recording and was just trying to attack Alec - using their daughter as a weapon.

Has it occurred to NO ONE that Ireland might have leaked the recording? It was her phone after all, and she had a lot to gain by releasing it: making the world understand why she doesn't want to answer her phone and to get the court to see that HE is alienating her himself, and that she deserves protection from him, not to be served up to him on a legal platter!

I'm not saying she did it, cause I don't know her yet, but if it was on MY phone, I would've released it.

I want to open a restuarant the serves only child-rapists and sociopaths. No other meat will be on the menu. There'll be some salads and other vegetables and LOTS of desserts, but if you want meat, it will be Bundy Burgers or Ramsey ribs or BTK BLTs.

Posted by Ethel Spiliotes at 7:34 AM 1 comments 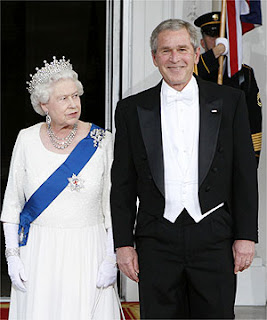 "President" Bush said that the queen is hundreds of years old and when he realized his mistake said, "She gave me a look that only a mother could give a child." Yeah, a mother who is thinking she forgot to drown one. What an idiot. First he said she was a million years old and they he called her a mother. Maybe she could take him home with her and teach him some manners. And then keep him! 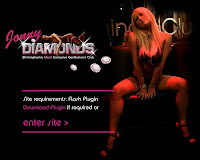 Posted by Ethel Spiliotes at 11:03 AM 5 comments