I figured out how to make links in here, so the links to the raccoon sounds are fixed in the "More on the War" blog (June 11). I especially love the sound the 'sow'(the mother - she's not a pig) makes. I like to listen to it over and over (it's short), which drives the rest of my family crazy, but I like it. It sounds like a big happy cat.

Posted by Ethel Spiliotes at 10:11 AM 0 comments 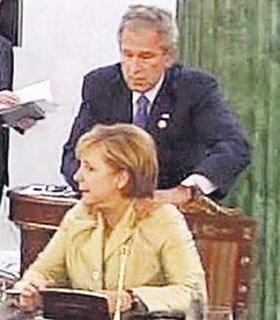 Is it hot enough for you?

Even the atheists are starting to believe in hell -- and it's here on earth (like the Jews say). Lucky for me I live in Orange Countty, where everything is air-conditioned (though not OVER air-conditioned like NY office buildings -- so hairy, sweaty men can still wear their 3-piece wool suits -- idiots!) I feel sorry for people in Europe and New England who are still stuck in the old-days of the occasional two or three day heat wave. Is it a heat wave if it lasts for months? I think is's more of a heat tsunami. Katrina's going to look like the little sister of the monsters that are coming.

I don't know what it was like in the "normal" times that the adults still believe are normal and that we'll be getting back to any minute, but I can say that as long as I can remember it's HOT, VERY HOT, and it's getting worse.

whatever trees are left are going to have to start breathing a lot more heavily. So people better get over their "a man and a woman" "missionary position only" sexual prejudices and hope that some of those tree-huggers move on to heavy petting.

I don't know why people think that summer is so much fun. It's more like hell if you ask me. It's hot. Very hot. Too hot. I know it's wrong but sometimes I have to go stick my face in the freezer. I want the remaining glacier(s) to melt and the cold water to come turn my bed into a float. Not really, just in my fantasy (a real fantasy - as opposed to pervert fantasies which are not really fantasies because they really happen.)

I also hate summer because I don't get to see all my friends at school, and I have to spend more time with my brothers who unfortunately are not incapacitated by the torturous heat. People misbehave in the heat--there are more murders. My cat Kevin has been trying to rape our other cat Jamal, and my idiot brothers just point at him and say "Kevin's a faggot! Kevin's a faggot!" I don't care if he's gay. He's a RAPIST! Jamal clearly doesn't want him to do it. He cries and tries to get up. I yell at Kevin and he looks at me like he doesn't understand, so I have to pick him up and take him off poor Jammy. It must be because he's in captivity, but if I let him out, he'll get run over by some idiot in an SUV, so what am I supposed to do? They're both neutered, but I think my brothers let Kevin watch the Discovery channel.

I can't wait til I can go back to school, where the girls do well, and the boys do nothing - because they DON'T HAVE TO, BECAUSE THEY GET ALL THE JOBS AND THE MONEY AND THE PROPERTY ANYWAY!

Yet another holiday that involves burning animal parts in the backyard. I am all for independence day, and I like to blow things up as much as the next ten year old (which is a LOT), but I don't want to go to the town park with my family and watch a lame firework display that upsets all the dogs and babies. (The best part is the accidental (every year?) brush fire afterward.)

I would rather get together with other children to declare our independence and target our oppressors. I'd like to put some fireworks in Mr. Chudgewhistle's stretch pants. He's the fifth grade science teacher who's always trying to get the girls to fish the candy corns out of his pockets. Then I might want to go after the senior citizens who are stealing all of our money. They get free health care even if they're rich, but not all kids do, and they get much more money than schools because they vote and whine and all the politicians are afraid not to give them whatever they want. Us children on the other hand, are FORBIDDEN to vote. We have no say in our government. Wasn't that the reason American rebelled and became an emancipated minor????

Fireworks are dangerous, and sometimes things that aren't supposed to accidentally catch fire. And I just hope that when the kabooms go off I'm not anywhere near any of the Iraq war vets, cause they might mistake me for a ten year old Iraqi girl.