I WISH it was the Planet of the Apes

Mother bear kills cub and then itself 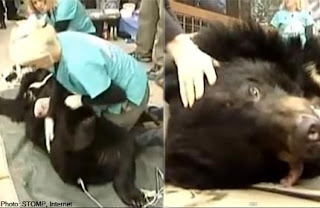 I don't even know what to say about this, except to say that she should've killed the humans instead. ALL the humans.  What is wrong with people?  This momma grizzly is a hero (unlike Palin, who would probably approve of people keeping bears in cages and "milking" their gall bladders to make "medicine" for penis enlargement or whatever.)    Didn't people watch the Planet of the Apes?   I'm not saying all Chinese would do this.  I know there are animal rights people everywhere, but the Chinese government doesn't seem to have a problem with it, and when they take over the world next week then we shouldn't be surprised if us Americans end up in cages with metal vests on having our pancreases milked so the newly diabetic obese Chinese boys (cause that's what the children pretty much are) can have fresh insulin.

I think it's time for a remake of Kung Fu Panda - but this one won't be a Disney movie.

Posted by Ethel Spiliotes at 5:12 PM